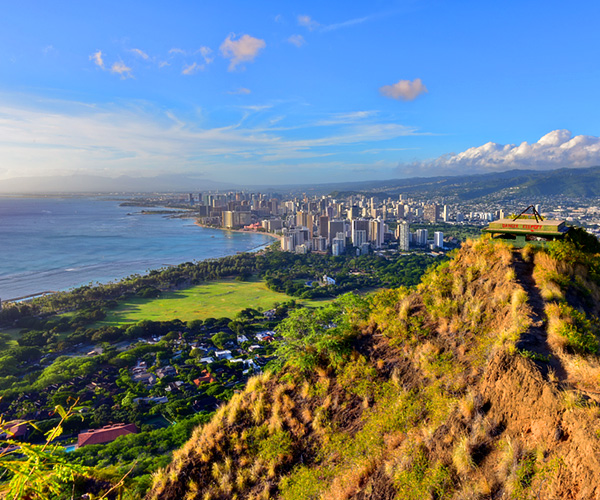 The peaceful, eclectic, mid- to upper-priced neighborhoods of Aina Haina, Kuli’ou’ou, and Niu Valley are tucked into the foothills and up the sides of Ko’olau Mountain ridges along Kalanianaole Highway. On the makai (ocean) side, the Maunalua Bay beachfront is graced with lovely beach parks, lavish homes and Paiko Lagoon Wildlife Sanctuary.

High-end homes and condominiums dot the base of Diamond Head, the extinct volcano that is Oahu’s most famous natural landmark. At Kupikipikio (Black Point), the portion of the Diamond Head community that swoops out into the Pacific Ocean, the late billionaire Doris Duke built her beloved Shangri-La.

Another millionaires’ neighborhood and one of the most famous communities in the world is Kahala. Upscale Kahala Mall caters to this discriminating population.

Kaimuki and Kapahulu are two of Oahu’s most lively communities. The houses along the neat, hilly streets have personality and character. Waialae Avenue, which is downtown Kaimuki, looks like 1940s-50s Main Street, U.S.A.

In the fertile depths of Palolo Valley, crops and orchids grow in abundance. Working-class Palolo is a homey, multi-ethnic suburb of affordable homes. Each September, the community holds a good, old-fashioned Palolo Pride celebration in Palolo District Park.

For decades, the wealthy community of Waialae-Kahala has been the playground of royalty, movie stars and the rich and famous. The Kahala Mandarin Oriental Hotel is the legendary host of the world’s discriminating travelers, and the Waialae Country Club is the stage for the $4 million Sony Open golf tournament.

Wilhelmina rises above it all like a jewel in an elevated setting. The well-established mid- to high-priced community of Wilhelmina Rise offers mountain ridge-high panoramic views of the blue Pacific and the glittering lowlands of southeast Oahu.

Thank you for your inquiry.